In June of 1883 the band was engaged to play for dancing at Nostell Priory by the Brighouse Conservative Association. Everyone went by train from Clifton Road station. The fare being 1 shilling for 3rd class and 2 shillings for 1st class passengers.

In 1885 the band was again engaged by the same association but this time at Wharncliffe Crags near Sheffield.

During the next 8 years it seems the band went through a difficult period, as it was found they only had 11 instruments plus a bass and side drum in 1893. Which were still in the band room at the old curriers shop. Now I wonder if anyone knows where that was situated in Clifton. If anyone has this information please let me know. 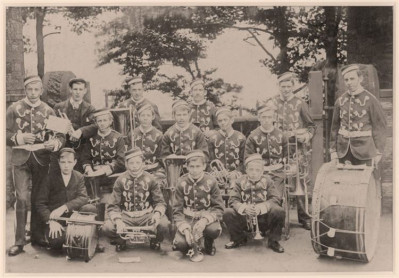 The following year on April 13th the band held a public tea and entertainment evening in the local school room. This was attended by approximately 100 people. The entertainment consisted of violin solos, duets and a few band selections. There was also a most amusing dialogue. A further tea and social was held in the school rooms on Easter Monday of that year.

In 1894 the band was called the Clifton Private Subscription band. I wonder why private subscription? During that year on the 14th May the band led the procession for St John’s Church around the village. (116 years later in 2010 the band is still performing at St John’s Church).

The photograph shows the band in 1894.

Another big change occurred for the band in 1895, when it moved premises from the curriers shop to the “Prospect” band room situated at the Black Horse Inn. Things were now much improved as the band had a profit of £5-11sh-5 ½ p for that year.

For some reason in 1896 Mr Fairburn Rayner must have given up the baton for a time as it is recorded that a Mr W.Atkinson of Wyke was engaged to take the band at a fee of 3 shillings per rehearsal.

Over the next 4 years the band regularly played for the Whitsuntide walk around Clifton for St Johns Church.

The AGM on February 1st 1902 was held in the evening at the church school room, with Mr Sam Walton presiding. A Mr H. Brearley gave a lecture on “Clifton in the olden times”. Songs were also performed by Miss Hemingway of Halifax. What is interesting is the fact that Thomas Rayner performed two cornet solos.

I can well remember my teacher, John Womersley referring to this gentleman being a member of Black Dyke in later years, possibly between 1902 and 1912.