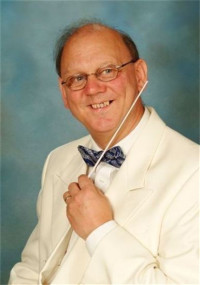 John started his career on cornet with the Clifton and Lightcliffe band when he was nine years old. At the age of fourteen he was one of the youngest players to successfully audition for the famous Black Dyke Band, where over the next fifteen years he played all the cornet positions including principal before settling on flugel horn.

He was also the Principal Cornet of the National Youth Band of Great Britain at the age of 16.

When he left Black Dyke due to work commitments he returned to his roots with the Clifton and Lightcliffe band where he wanted to give something back to the movement. He decided to give extra tuition to some of the younger members and from the initial four members who came along in 1977 on Saturday mornings he formed a Junior band which is now our ‘B’ band and which he still conducts today. John has always firmly believed that the foundation of all organisations is the encouragement of its younger members.

John studied for his B.A. after being made redundant from the textile industry and is now a music teacher, he is also arranging music and has had a number of pieces published for brass band. He was appointed Musical Director of the senior band in 2005. Since he took over the baton he has steered the senior band four times to the National Brass Band Championships.